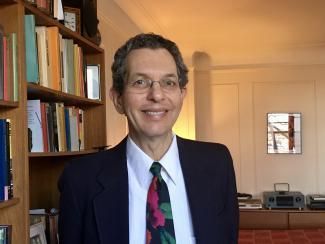 Until 1933, Jewish lawyers were among the most prominent in the profession.  But the Nazi regime immediately tried to kick them out and, after five-and-a-half years, completed its efforts.  This talk tells that story.

With harrowing details, it shows how the Nazis got rid of Jewish lawyers through lawless violence and legalized discrimination; how Jewish lawyers tried to hold on but eventually suffered economic devastation and social humiliation; and how a small number actively resisted.  Ultimately, the story is about a liberal democracy collapsing under the weight of an authoritarian state.

Our presenter is Douglas Morris, Ph.D., J.D.  He is a legal historian and practicing criminal defense attorney with Federal Defenders of New York, Inc. He is author of Legal Sabotage: Ernst Fraenkel in Hitler’s Germany (Cambridge University Press, 2020) – which explores the way a Jewish Social Democratic lawyer in Nazi Germany represented political defendants in court, engaged in underground activities, and produced both a classic analysis of the Nazi regime and an original theory of resistance. Mr. Morris is also the author of Justice Imperiled: The Anti-Nazi Lawyer Max Hirschberg in Weimar Germany (University of Michigan Press, 2005), and has published a series of scholarly articles on twentieth-century German legal history.

THIS CLE QUALIFIES FOR MISSOURI BAR DIVERSITY/EQUITY/IMPLICIT BIAS CREDITS. IT WILL BE PRESENTED IN WEBINAR FORMAT.

IMPORTANT: SPACE IS LIMITED. SIGN UP EARLY TO GUARANTEE A SPOT.

THIS PROGRAM IS FREE FOR THE FOLLOWING INDIVIDUALS: LIBRARY MEMBERS, SLU LAW STUDENTS AND FACULTY, INDIVIDUAL DONORS TO THE LAWYERS WITHOUT RIGHTS EXHIBIT AND HOLOCAUST MUSEUM DONORS AND DOCENTS (INDICATE THE HOLOCAUSE MUSEUM AS YOUR FIRM NAME).